In November 2007, on his first mission trip to Southern Sudan, Greg felt a strong desire to quit his secular job and return to Sudan as a full-time missionary. For two and a half years he lived in a tent, travelled by foot, and was even unjustly and severely beaten. During this time, Greg coordinated the construction of three Hope4Sudan compounds to serve the Southern Sudanese people. In 2010, Greg left the field for a short time of missions training at SAFARI (Semester Abroad For A Radial Impact) in South Africa. While there, he officially joined IPHC World Missions Ministries (WMM). They asked him to go to Maputo, Mozambique, to coordinate the Clinic and Training/Conference Centre building project. While in South Africa, Greg met his future wife, Latoya. On completion of the Mozambique project, Greg desired to return to Southern Sudan and fulfill his call to work with the Sudanese people. Greg and Latoya married in November 2011, and in the spring of 2012, went to southern Sudan where Greg resumed his role as Ministry Director for Hope4Sudan. Over the years, Greg has managed the completion of several major building projects and hosted several teams. Greg and Latoya have two boys and are active in ministries in both South Sudan and Kenya.

Greg says he is often asked what roles he plays in South Sudan and which one is his favorite. As the Administrative Director of the H4S compound, he has the privilege of being involved in each area of ministry: overseeing the school and clinic, as well as Compass Kidz and the youth mentorship program; going on village outreaches and to the village Sunday School each week; acting as foreman whenever there are building projects; and serving as the senior pastor of the Hope4S.Sudan Church. He says his head spins if he thinks about everything at once, but he knows that God’s grace is sufficient, and His power is made perfect in our weakness. “If anything is certain,” he says, “it is that I have had countless (ongoing) opportunities to prove His grace and power in this place.” As far as his favorite role goes, he says it’s a tie for first place: mentoring the compound boys and pastoring the church. Although he will tell you he is not crazy about preaching, he says it’s an awesome feeling to sow into the lives of people, especially young people, and to watch them mature spiritually and in every way. He and Latoya count it a blessing to be the vessels God uses to help someone get through a tough season in life! It is a blessing He gives to all His children who are willing to step out in faith and invest in the lives of others. 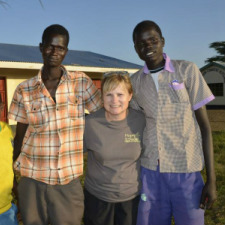 Lauren went to Sudan with a mission team for the first time in November of 2007. Although she had previously been involved in numerous missions teams and seen a lot of places in need, her heart was completely unprepared for the desperate situation of the people she encountered on that trip. Lauren told God she didn’t have a clue how or know what to do, but she knew she felt God touch her heart and committed with His help and direction to do whatever was in her power to do. From that commitment, Hope4Sudan was born. Lauren says Hope4Sudan is a perfect example of what God can accomplish if someone is willing and makes himself or herself available to be used.

Lauren serves as Director of Hope4Sudan. She spends her time raising awareness and support, as well as leading different kinds of teams to what is now South Sudan. She resides in Germantown, Tennessee. 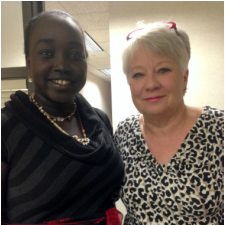 LaVonne has a passion to see broken hearts healed and to see those in bondage set free. For the past thirty years, she has been travelling throughout the southeastern United States, leading women’s retreats in drug treatment centers, rehabs, halfway houses, prisons, churches, community centers, and women’s groups. Her passion to help others in need inspired her to become a part of the Hope4Sudan team by serving as a visa agent. LaVonne is a blessing; she plays a valuable role acting as an intermediary between team members and the South Sudanese consul, securing visas and handling travel documents.

LaVonne is a retired loan officer from Tampa, Florida and now resides in Washington, D.C. with her husband, Mario.